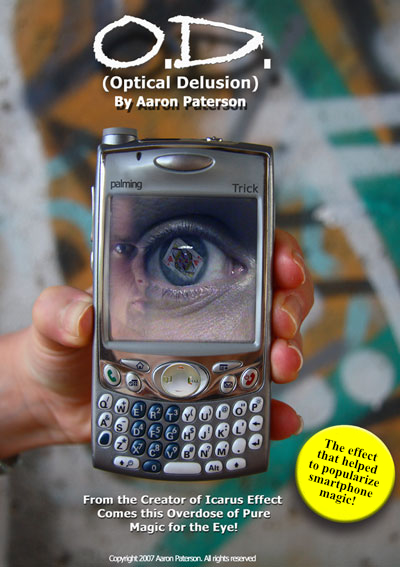 Aaron Paterson has once again released one of his most closely guarded secrets to the magic trick world, O.D. (Optical Delusion)!

A spectator’s business card is obtained…

The spectator is asked to gaze into the photo eye...

Using the info from the previously obtained business card, the performer actually emails the transformed photo along with his contact info to the spectator from his cell phone (provided his cell phone has that capability).   Leaving them his electronic calling card and an unforgettable memory.

Shot in high definition and presented in widescreen

Note:  While the preparation of the O.D. (Optical Delusion) magic trick is fairly involved, once prepared, OD is easy to perform, practical and ready to go anywhere, anytime.

Here's what trick reviewer for Genii Magazine's Danny Orleans had to say about O.D. (Optical Delusion):

"AARON PATERSON HAS TAKEN card tricks into the 21st century. His Optical Delusion is the best trick I have ever seen with a cell phone."

In stock - ready to ship.

Click on the appropriate PayPal button below to add this item to your secure Paypal shopping cart.


INTERNATIONAL CUSTOMERS (shipping address OUTSIDE of the continental USA and Canada)